The Florence Mine King of the Hill – By Stewart Luce

Charlie Taylor reached Goldfield, Nevada in the summer of 1902. He located the Florence Mine as well as several lesser claims. Goldfield became a mining district on October 20, 1903. Taylor had several claims and tried to sell to no avail so he became a lessor.

In June 1904 the Florence had been leased by a man named Sweeney and he began to ship ore within months. More than 5,000 claims had been located in Goldfield by 1905. Ownership was continually changing. People all wanted to buy shares in the most valuable mines. The Combination, Florence, Jumbo, Red Top, January and Mohawk were names on everyone’s lips.

Tom Lockhart appeared in Goldfield around 1903. He was older and kind of awkward, but he had cash. He was grub staked by Colorado railroad man A. D. Parker. Lockhart had first shown up in Tonopah where he found a claim and day by day worked it himself. He climbed up and down his mine shaft without help, filled a bucket at the bottom of the shaft with ore and pulled it to the top. Lockhart sold this claim for $28,000 and moved south to Goldfield. 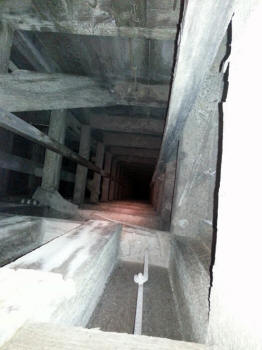 Rustler Fraction Mine Shaft, Florence Mine. This is one compartment of a two compartment shaft of the Rustler Fraction Mine.  This shaft  is 840 feet deep. The Rogers lease of this mine encountered some exceedingly rich ore, and within a few months produced over $650,000 worth of gold that would be worth over 44 million today.  Photo courtesy of  Jon Aurich.

At Goldfield Lockhart came into contact with Charlie Taylor. Lockhart along with his partner A. D. Parker bought a half interest in the Florence for $3,500 from Taylor. Lockhart got other stock holders to sell him additional interest in the Florence. Eventually Lockhart and Parker gained control of the Florence. They held it with a tight grip. Parker as a new millionaire rose to president of the Colorado and Southern Railroad. Parker was the moneyman and watched every dime, nickel and penny the mine produced or spent.

In 1906 George Wingfield and George Nixon organized the Goldfield Consolidated Mines. They wanted the Florence as part of the group but Lockhart and Parker would never sell. It should be noted that the Florence Mine Company had issued shares of stock that provided capital for mining operations and equipment.

The last major mill in Goldfield was built at the Florence and started operation in January 1909. The mill had forty stamps and processed 160 tons a day. Unfortunately it was destroyed by fire in 1911. Lockhart and Parker were offered $6 million for the Florence in 1908 and turned it down but the Florence was soon to be working only low grade ores. Lockhart retired in California with most of his wealth intact; he died in 1910. Without Lockhart to push the mine along, the Florence went into receivership in 1916.

Between 1916 and 1922 several different mining companies obtained the Florence lease only to move on when it did not provide a big return on their investment. From 1919 to 1941 small scale mining was done in Goldfield yielding only about $300,000 per year. Goldfield had succumbed to the old mining town adage “boom-bust-decline.” A young man, Martin Duffy was in Goldfield in the early twenty’s. His goal was to become successful as a miner but he went far beyond. He was to be an owner of the Florence and a Nevada state senator from 1959 to 1963. Duffy started leasing the Florence in 1923 at age 23. The Florence is located on a hill east of Goldfield. In 1938 he discovered a pillar 17’x40’x6′ in the mine. It produced $160,000 in gold in six months. Duffy met school teacher Ruth Grove in the mid forty’s. They were married in 1944.

Ruth supported Martin by helping him work the mine. In 1952 they were able to purchase a 50% ownership of the Florence. They established a residence at the mine by moving a small house onto the mine property. Martin worked the mine until 1971 when he was killed by a mining accident. Martin had written a history of the mining area “Goldfield’s Glorious Past.” Jon Auric had been introduced to old mining towns by his father. In 1982 at age 16 he visited Goldfield and became very interested in local history. Jon met Ruth Duffy who took a liking to him. They both shared an interest in Goldfield history and mining. Jon went on to purchase and restore several old buildings in Goldfield. When Ruth passed away in 1995 she left her holdings of the Florence to Jon. He is maintaining her interest and would like to see the Florence become a national treasure.

Ring with High Grade Gold from the Florence Mine, Goldfield, NV. Photo courtesy of Jon Aurich

Want to see more about the Florence Mine in Goldfield and surrounding areas?  Check out the  Jon Aurich – Goggle Plus website.

Ring with High Grade Gold from the Florence Mine,
Goldfield, NV.  Photo courtesy of Jon Aurich