Born in 1876 in Arkansas to a family who’s father worked as a cattle buyer. In 1883 the family moved west settling in Lakeview, Oregon. His father owned several ranches and there George grew up. 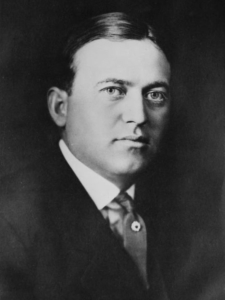 By age 16 he was on cattle drives to Winnemucca, Nevada. On his last cattle drive he decided to stay. He was good at playing poker and in 1899 he opened a saloon in Golconda, Nevada. He met banker and Senator George Nixon in Winnemucca. Nixon was 16 years older than George and became his mentor.

In May 1901 after selling his saloon Wingfield arrived in Tonopah. It had only 250 residents. Building was going on and everything was developing. Jim Butler who had discovered a mine in Tonopah was the one who developed a verbal leasing system under which he and his partners received 25% of all net profits.

Wingfield arrived in Tonopah with some money, good friends and saw opportunities. He started as a gambler at the Tonopah Club. A fellow gambler John Hennessy became his partner. They took over the Tonopah Club and by the end of 1902 they had a profit of $200,000. In October of that same year Nixon and Wingfield also became partners. They invested in real estate and mining stocks. They also made loans to potential miners at 2% per month. Their friendship would become a financial and personal success. By 1904 the partners had become millionaires but neither was aware of the future for them in new gold finds at the town south of Tonopah.

Before he was thirty years old, Wingfield was vice-president of the famous Goldfield Consolidated Mines Company.

In December 1902 two prospectors, Stimler and Marsh discovered gold on Columbia Mountain. In 1903 Nixon and Wingfield made small investments in new discoveries in the area. When shipments of gold and the town of Goldfield became known, the two men became interested.

In 1904 Wingfield purchased the Stimler and Marsh claims separately. Nixon purchased claims that made up the Mohawk. The two joined the investments together as partners. Then they joined together to buy the Sweeney and Reilly leases on Florence Mine ground. Their profit for 1904 was $600,000 and was split between Sweeney, Nixon, Wingfield and Hennessy. The two partners earned $350,000 the following year on the same property. In 1905 Wingfield moved from Tonopah to Goldfield. He purchased a house at 250 Crook Street and would later reside atop the Nixon Building in an apartment. He also purchased a saloon, but his partner Nixon stepped in and advised him to give up gambling for a respectable world of lawyers, bankers and educated men.

Wingfield listened to his mentor selling the saloon and concentrating on mining investments. He would become friends with people like financier Bernard Baruch and bank president William Crocker.

Nixon and Wingfield invested in the following mining stocks: The Mohawk, Red Top, Jumbo, January, Goldfield Mines and Laguna. The two partners then decided to join all these properties under one company. In November 1906 they organized the Goldfield Consolidated Mines Company. It was to be the crowning glory of the two men’s holdings worth $25 million. The only mine not to join was the Florence.

A problem was coming to Goldfield in the form of the Industrial Workers of the World (I.W.W.), a union that had already caused riots and strikes in other mining areas. In Goldfield they threatened a strike.

A problem was coming to Goldfield in the form of the Industrial Workers of the World (I.W.W.), a union that had already caused riots and strikes in other mining areas. In Goldfield they threatened a strike. Mine owners took action and shut down their mines putting between 6,000 to 6,500 men out of work. Trouble continued throughout 1907. It finally ended when Governor Sparks of Nevada sent in Federal Troops to protect both life and property. Eventually the troops were withdrawn and Goldfield got back to mining.

In 1909 Wingfield and Nixon dissolved their partnership. Nixon took the banks and Wingfield took the mining interest. Wingfield had also moved to Reno and purchased a house at 219 Court Street. This would be his headquarters for all his financial investments, but he still visited Goldfield quite often to insure his mining interests were running smoothly.

Wingfield developed a big interest in politics and with his wealth he was able to work with both democrats and republicans. During the 1920’s he promoted new ideas for Nevada including the quick divorce requiring only 6 weeks residence. His biggest idea was to reinstate legalized gambling.

These ideas would turn Nevada into a major tourist attraction. In 1931 it was discovered his bank had been embezzled and $500,000 in state funds were missing. Wingfield put up the money but ended having to go bankrupt. He was no longer the richest man in Nevada. He had used his money to promote Reno, Goldfield and Nevada itself. Between 1931 and 1935 he was rebuilding what he had lost. In 1935 he invested in the Getchell mine. It proved to be very successful and it started him back to a man of wealth. Now in his senior years he was slowing down. In 1955 Wingfield sold the Riverside Hotel and his Reno security company. With all the fortune he made in Nevada, he never left the state like to many others that had made their money in Nevada. George Wingfield suffered a stroke in 1959 and died on Christmas day.