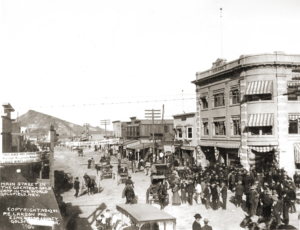 Claude Inman, born in 1873, was raised on a ranch near Bishop California. At an early age he learned to ride, shoot and herd cattle. At age 19 he moved to Los Angeles to learn the carpentry trade. He showed up in Tonopah about 1901.His skill as a carpenter did him well. He worked on mine shoring, carpentry repairs and built houses.  In December 1902 Harry Stimler and Bill Marsh found gold in Goldfield and the rush was on.

Claude felt that the new camp would require the services of a carpenter. So in mid-1903 he loaded a wagon with his tools and lumber and headed for Goldfield. His first project was a store built on wheels. This allowed the owner to move to the location of the business area when it was established. At the end of the year he brought his wife and son to the camp. They started out living there in a two room tent…

In 1904 Claude built the first school house in Goldfield and served on the school board. He then became chief of the volunteer fire department putting out a fire with beer when water ran short. By the end of 1906 Goldfield had running water, electricity and telephones. Its stock exchange was running wild selling gold stocks. Every sort of con-man, criminal and rich investor found their way to Goldfield. The town was taking on a new persona from gold camp to city. It needed law enforcement to keep a lid on its wildness. It was the mine owners who would see it happen…

Finally he stood up and said “What are we, a bunch of women? I can name a man who can clean up this town if you give him a free hand.”Then he pointed at Claude Inman and said, “Right there he is, Claude Inman.”

A group of mine owners held a meeting in late 1906 to discuss mine workers who were stealing gold. Lt. Gov. Joe Hutchison of Idaho was in the meeting watching everyone complain about the thieving going on. Finally he stood up and said “What are we, a bunch of women ? I can name a man who can clean up this town if you give him a free hand.”Then he pointed at Claude Inman and said, “Right there he is, Claude Inman.”The crowd of Mine owners shouted for Inman to accept and he did. Next day the the newspaper had a headline “Inman Accepts.”In January 1907 Inman officially became constable of Goldfield. 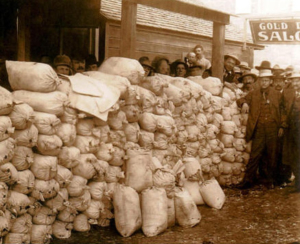 He was offered a $10,000 a month guarantee or 40% of all the gold he recovered. He would never collect his guarantee because the percentage was always higher than $10,000. His principle job was to hunt down men who stole gold from working mines. Inman had an idea of who to hire for deputies. He went to Nevada’s governor for a deal to hire outlaws and gunman as deputies. The governor agreed as long as the men were law abiding, they would be pardoned for past crimes.

Inman went into outlaw territory and hired 14 men he could trust. The miners who stole gold were known as high graders. It was this group that mine owners wanted to stop. One group of high graders Inman arrested was using a trunk to hide their ill gotten gains. They put in a shelf half way inside the trunk then spread the gold ore under it. The shelf was then covered with ladies clothes. Inman had been given a tip and raided the house where the trunk was located just prior to the high graders trying to leave town. The value of gold recovered was $100,000.

While Constable Inman did hunt down thee occasional horse thief, raid opium dens and deal with shootings and murders, his principle job was to hunt down men who stole gold from working mines. Argentos, a local horse thief, was heading for a ranch on the edge of Death Valley. Inman and a deputy were right on his tail. Riding hard they beat Argentos to Grapevine Wash. As he rode up Inman ordered him to put his hands up. Argentos reached for his gun and Inman warned him, “The next time you reach for your gun you’ll be dead in hell.” Argentos was taken back to Goldfield. Inman’s handling of law enforcement made him Goldfield’s toughest cop.

Constable Inman attempted to slow down the shootings and murders by confiscating guns. This drive in March-April 1907 gathered so many guns that the stack of weapons out stripped available storage space. It did slow down murder in Goldfield for a while but soon men went back to carrying firearms.

While no Chinese worked in Goldfield, there were opium dens. They were located west of town at the end of Brewery Avenue. Inman organized a raid to close them down in February 1907.The constable and his deputies seized $2,000 worth of drugs, pipes, lamps, scales and other doping items. The constable found out some of those arrested were important people of the town, men and women. These dens slowly died out when the U.S. Government put a ban on importing drugs from China. 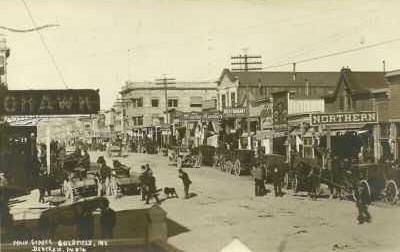 Goldfield’s boom lasted 7 years from 1903-1910 but it had some serious trouble. At the end of 1907 the Industrial Workers of the World (IWW) and the Western Federation of Miners (WFM) joined forces and created a strike. The strike forced the government to send troops to Goldfield to put down riots. Inman participated in trying to restore order but was overwhelmed by the unions. Later on IWW and WFM would be recognized as Marxist organizations.

Toward the end of Inman’s service as constable, Tex Rickard, who was the owner of the Northern Saloon, presented Inman with a Smith & Wesson revolver to recognize his service to Goldfield. It had been exhibited at Chicago’s Columbian Exposition of 1893. It was engraved by Gustave Young and inlaid in gold. The pistol sold in 2013 for over $150,000. Inman owned this pistol until his death in 1962.

Claude Inman left Goldfield in early 1909.He moved back to Bishop and then to Southern California. In the early forties an idea was launched for a movie script to be written but nothing ever came of it. He lived with his son in Redondo Beach, CA until his passing in 1962.