The Longest Fight On Labor Day, 1906, in Goldfield, Nevada, Gans and Nelson were matched in the first Fight of the Century promoted by Tex Rickard, who would later achieve greater fame by promoting Jack Dempsey’s million-dollar fights.  The Goldfield match under the blazing Nevada desert sun drew the largest gate in history at that time, with a purse of $30 thousand and attendance over 8,000. Before the fight, the ring announcer read the telegrams from fans who could not attend, as was the custom.

A note from Gans’ foster mother stated: Joe, the eyes of the world are upon you. You bring
back the bacon. Newspapers across the country the next day reported on Gans’ ability to Bring Home the Bacon. The phrase caught on and is now part of everyday speech. Gans won the fight after 42 grueling rounds. Forced to make an unnaturally low weight of 133 ringside in full boxing gear, he became ill from the weight loss.

Joe Gans became the first American-born, black sports champion when, in 1902, he won the
world lightweight boxing title in Fort Erie, Canada, with a spectacular one-round knockout of the defending champion, Frank Erne. Gans was one of the first practitioners of scientific gloved boxing, following the era of bare-knuckles fights. Known as the Old Master, he fought in three divisions (featherweight, lightweight, and welterweight) for 18 years, compiling over 150 career wins and over 100 knockouts. After his death from tuberculosis in 1910, Gans was considered by many to be the greatest fighter who ever lived.

One newspaper columnist noted that, the sorrow and not the merriment of his people are written on his face. He has the saddest eyes. In 1907 and 1908, with the death germs of tuberculosis ravaging his body, Gans defended his title several more times before losing it in a rematch to Battling Nelson in 1908. Gans continued to fight, wanting to earn enough money for his family to live comfortably after he was gone. 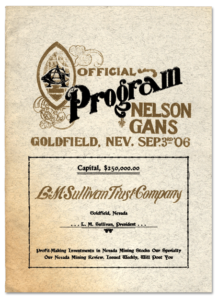 Joe Gans overcame the prejudices of his time and proved that black men could achieve success despite the great odds against them. With his winnings from the Goldfield fight, he established the Goldfield Hotel in Baltimore, a black and tan club, where he gave the great, rag-time musician, Eubie Blake, his first big opportunity. Nat Fleischer rated Gans as the greatest lightweight boxer who ever lived. Generations of boxers have been taught the moves that were first perfected by the Old Master.   -Colleen Aycock and Mark Scott