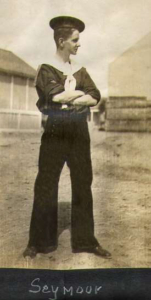 Seymour was one of eight in the first senior class in the new “Goldfield High.” He was also Mr. Thomas Kennedy, a Goldfield gentleman in the High School Players play, “The Revolving Wedge” played at the Hippodrome as part of the Thanksgiving Program on November 25, 1908. And he was on the staff of the first edition of “The Joshua Palm”, the official publication of Goldfield High.

In May 1908 and 1909, Seymour won second prize for boys at the annual Declamation Contest between the boys and girls of the high schools in Nevada held in the University gymnasium in Reno.

Seymour’s father, William Taylor Olmstead, born September 10, 1866 at Norwalk, Connecticut and his mother, Margaret Cecilia Denis, born in Memphis, Tennessee on August 24, 1867, were married in Manhattan on July 9, 1887. William and Margaret were the parents of three children, Seymour G., born in Manhattan, New York, November 28, 1889, and his older and younger brothers who both died in infancy. The family moved to Utah in 1896, locating in Salt Lake City, where William became associated with R. E. L. Collier, Civil and Mining Engineer, in U. S. survey work.

In 1905, the family moved to Goldfield, Nevada where William started U. S. mineral survey work. 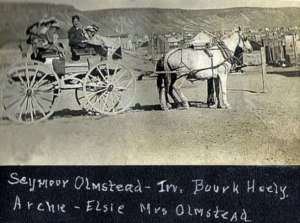 several mining claims and in 1907, his firm of Olmstead & Rich, U. S. Deputy Mineral Surveyors, published Elmer J. Chute’s Map of U.S. Patent and Location Surveys in the Goldfield Mining District, the most complete map of this type at that time.

In 1909, on November 24, Seymour’s mother, Margaret, passed away and was laid to rest in the Goldfield Cemetery. In the Census of 1910, Seymour and his father, William are still in Goldfield where William is working as a mining engineer and surveyor and Seymour is working as a surveyor’s chain man.
In 1913, Seymour had relocated to Utah where he was working at Bingham Canyon, southwest of Salt Lake City. On July 25, 1915, he was a pallbearer in Salt Lake City for Frank White, a twenty-two year old friend who died in an accident at Bingham.
In June of 1916 when he was a candidate for membership in the American Institute of Mining Engineers, his resume was quite impressive: 1907-09, High School, Goldfield, Nevada; 1910-13, Civil Engineering, International Correspondence School; 1910, Oregon Shortline Railroad, Idaho Branch; 1911, Goldfield Consolidated Mines Co.; 1912, general practice, surveying, Goldfield, Nevada; 1913-16, Bingham and Garfield R. R. and Utah Copper Co., Bingham, present position, Engineer, Utah Copper Co. 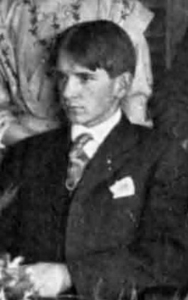 When Seymour completed his World War I Draft Registration on June 5, 1917, he was 27, single, living in Bingham, Utah, working as an Assistant Mine Engineer for Utah Metal and Tunnel Company. He was tall with a medium build, brown eyes, brown hair and blind in his left eye.

Seymour and his father, William are together in the 1919 Salt Lake City Directory, lodging in the Dooly Building on East 4th South and on October 15 of that same year, in Salt Lake City, Seymour was best man at the marriage of Miss Mona G. Heaston and Archibald D. Clark. In the 1920 Census, Seymour is age 30, single, both he and his father are in Salt Lake City, Utah working as Mining Engineers, Seymour for the State and William on his own, mapping and surveying.

An article written by Seymour, ‘Economic Geology of the Ophir Mining District’ was published in the November 1921 issue of Economic Geology and Seymour’s work took he and his father to Manitoba, Canada in 1928, Georgia in 1930, California, Arizona in 1934, Manila in 1939 and most probably elsewhere.

In the 1940 Census, Seymour and his father, age 73, are in Los Angeles, Seymour is age 50, single, working as a mechanical engineer in mining. In 1942, when Seymour completed his World War II Draft Registration Card, he was 52, living in Los Angeles and working for South Western Engineering Co., Los Angeles. He was 5” 9 1/2” tall, 155 pounds and his left eye had been removed. In 1944, on August 14, William, Seymour’s father, passed away at the Los Angeles County General Hospital at the age of 77. He was laid to rest in the Inglewood Park Cemetery.

In March 1950 and May 1951, in Los Angeles, Seymour was chosen as a winner for creative writing from among the students in the writing class at Braille Institute. In July 1958, Seymour, though blind, gave a talk on “Teaching the Sighted to See” at a meeting of Creative Arts, Inc. in Los Angeles. Seymour Gregory Olmstead passed away on October 19, 1959 in the Los Angeles County Osteopathic Hospital at the age of 69. He never married. He was laid to rest in the Inglewood Park Cemetery.

Editor’s note:  Interestingly, there is a street in Goldfield named Olmstead!