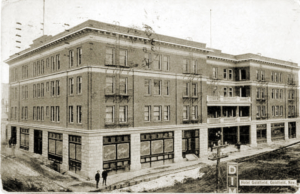 Construction began in April 1907. The main floor of the four-story building was constructed of grey granite stones from Rocklin, California, while upper stories were made from reddish-brown brick. The building is U-shaped and measures 180 by 100 feet. The center of the structure is recessed, with two wings for public rooms on the main floor and guest rooms in the upper stories. Hotel visitors entered the lobby by climbing a few steps up from the street onto the pillared porch. Above the porch were balconies on the second and third floors from which the guests could view the street, town and countryside. The floors of public rooms and the entry porch were covered by small white mosaic tiles interspersed with a few black ones to create a geometric design. The owners boasted that the building was fireproof and outfitted the upper floors with numerous black metal fire escapes.

The roof was flat with a massive white cornice extending over the edge of the top of the building. The original design of the hotel included 150 sleeping rooms and 45 suites with bathrooms.

A few of the guest rooms were located on the main floor, but most were on the upper floors. Most of the rooms shared a claw-foot bathtub and toilet, but all had running water.Steam heat was generated by an on-site power plant. The lobby contained the mahogany reception desk with the room key rack behind it, the switchboard, a public telephone booth, and the elevator. The elevator ran at 300 feet per minute, one of the fastest in Nevada. The saloon was off the left of the lobby; male guests entered the dining room directly from the saloon. The ladies, however, used a separate entrance from the lobby because they were not allowed in the saloon.

The dining room, named the Grill, was the largest room in the building, extending the width of the building with plate glass windows that overlooked Crook Street and where a large German-built Welte Automatic Orchestra serenaded the diners. Next to the dining room in the back of the hotel was the kitchen. Mahogany paneling covered the walls of the lobby, saloon, and dining room. Around the lobby’s three iron pillars were circular, black leather buttoned banquettes; other furniture included big leather swivel chairs, couches, and brass cuspidors or spittoons. Crystal electric lights and other lights were suspended from the beamed ceiling.

The estimated cost of the building was between $300,000 and $400,000. Manager and part owner J. Franklin (Frank) Douglas bought about $40,000 of furniture from Chicago for the main and second floors. The guest rooms were luxuriously furnished with carpeting, telephones, draperies, glass lamps, hardwood dressers with glass plate mirrors, cuspidors, and brass beds.

Do you have a Goldfield Hotel brass & copper spittoon, bed warmer, oil lamp or other?

In the 1980’s the late Gary Wakefield had a number of “reproduction” items for sale in his shop in Reno, NV. The brass items all had plates on them that read GOLDFIELD HOTEL, GOLDFIELD NEVADA. All these items were made to order in Mexico, there were no originals, they are all modern fantasy pieces. The brass oil lamps were about 17 inches high and the burners marked Kosmos Brenner. Shorter double lamps were also made.  Other reproductions made were, GANS-NELSON FIGHT PROGRAMS GOLDFIELD, NEVADA 1906.

Setting the historical marker on The Goldfield Hotel.  It really DOES take a village… 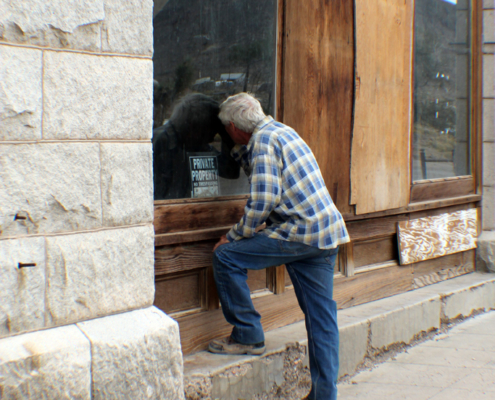 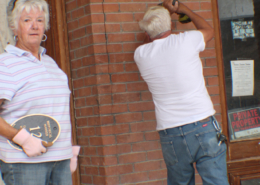 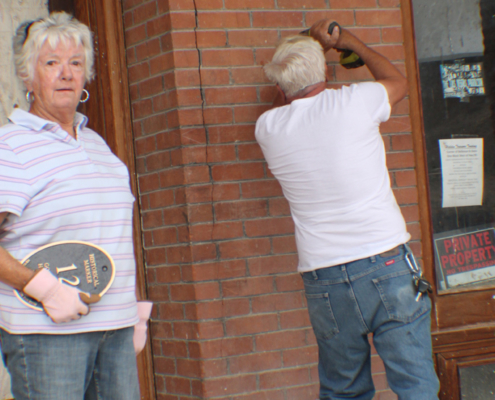 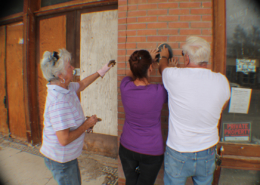 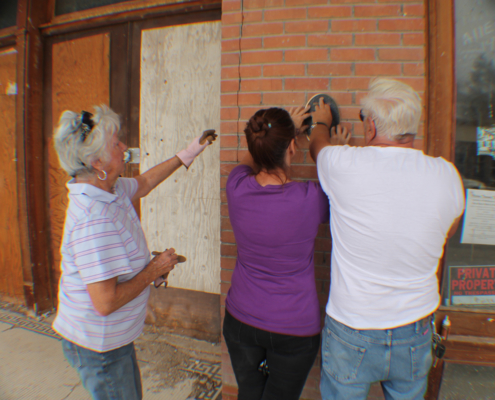