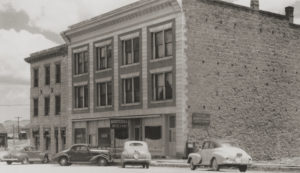 In the summer of 1907, a couple of gents named Marvin Ish and J.B.Curtis got together and began my construction.  The plans called for a basement and three floors.  At that time, Goldfield was the largest town in Nevada… teeming with a human population close to 20,000.  It was an exciting time to be a new building.  My primary construction was stone, roughly coursed on rear and side walls.  My main façade, which fronts on Columbia Street is faced with brick above the first level.   I’m proud to say my three stories are the best examples of Neo-Classical Revival influence on local commercial architecture.  But my most notable features include a large classical cornice, scored concrete pilaster strips between the upper story bays, and original cast iron storefronts.  I was a looker!
Anyway, those fellows managed to complete my construction in the late fall of that same year.  When my doors opened it was under the management of the Registration Trust Company.

The Registration Trust Company occupied the majority of my first floor, and basement.  The company offered an escrow department, auditing of stocks, issuing stock certificates, various mining forms, secure vaults for safety boxes and a special writing room for the ladies.  The rest of the building was advertised as modern office space with amenities to rival that of any in San Francisco with heat, indoor plumbing and janitorial services.  I was top of the line in my hey-day!

I was managed and occupied by the Registration Trust Company until 1919 when they sold me to George Wingfield.  Now, George, as everyone knows, was a mover and shaker and he moved the John S. Cook & Company Bankers to the first floor.  The company was fully operational when the destructive fire of 1923 raced thru the town.

I escaped the big fire which burned most of my fellow buildings in Goldfield to the ground.  But eighteen months later I nearly met the same fate.   In 1924 a fire broke out in the Grocery two doors away.  Most of block between Columbia and Fifth Avenues and Crook Street to Ramsey were destroyed.  My top floor burned exposing my third floor to the elements.  Fortunately repairs began immediately and I was back in business.  But sadly, the good times were over for most of Goldfield and town was never rebuilt.

The John S. Cook & Company remained on my first floor until Mr. Wingfield closed his last bank here in Goldfield in 1932.  Then I became the property of the Tonopah and Goldfield Railroad who moved their offices from the third floor down to my first floor.  They remained until late 1947.

Over the years 1946-1951 I housed a café, bar and hotel. In 1951 the owners of the Santa Fe bought me from the R.R. They planed to remodel and turn me into a full scale hotel, but it did not happen.  In the late 1950’s, yet a new owner had a pretty successful venue of a café and bar but his plans were to start a bank. Although he did develop a banking corporation, I was never opened as a bank.

In the 1960’s and 70’s, several different proprietors leased me for cafes and bars but none were very successful, so I sat empty on and off for several years. In the late 1980s I was used as offices for employees of the new corporation renovating the Goldfield Hotel, which was never finished. I saw little activity in the 1990’s and my roof failed with damaging consequences which have since been corrected.

I’ve survived fires, floods and riots but I am still here.  I am privately owned now, a work in progress, and restoration continues. I am only open to the public at the discretion of my new owners. 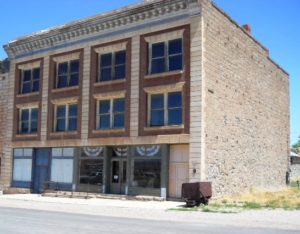 Editor’s Note:  There are no photos available of Marvin Ish and J.B. Curtis.  If you readers have a photo of these gentlemen, please contact the Society.

See the Historical notes for this story here.