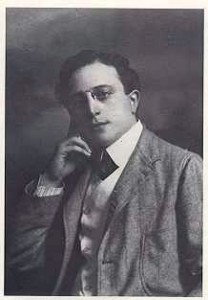 George was born as Jacob Simon Herzog on June 18, 1870 but after a term in prison he adopted the name George Grahm Rice.  He started a horse tipping service in New York City.  In a short time it had earned close to several hundred thousand dollars.  The business was investigated by the postal service and closed in 1904.

Everywhere stories were spreading about mining in Nevada.  Rice heard about the boom and headed west.  He found himself in Goldfield, Nevada.  With only $150 in his pocket, he started the Goldfield Advertising Agency.  Amazingly in six months his company earned $65,000.  This large amount of money was earned by writing material about Goldfield mines.  Larry Sullivan and Rice became partners.  They opened the L. M.In January 1907 the Sullivan Trust Company failed.  It was overextended and operating on credit.  Rice left Goldfield and moved to Reno, Nevada.  In Reno he started the Nevada Mining News.  In six months this venture also folded.  Sullivan Trust Company and it became an instant Success.  The company promoted stock in Goldfield, Manhattan and other mines. To further publicize stock in the mines, Rice and Sullivan joined together with Tex Rickard to promote a prize fight.  The fight between boxers Gans and Nelson got nationwide attention.  It was held on Labor Day, September 3, 1906.  Gans won and the publicity for Goldfield was nationwide.

Comedic actor Nat Goodwin visited Nevada.  When he met Rice the two men decided to open Nat Goodwin and Company.  They promoted mines in Rawhide and in Ely, Nevada.  The firm closed when mining collapsed in Nevada.

Once again the government came after George.  In 1911 he was put on trial for embezzlement, found guilty and sentenced to one year in Jail.  During the twenties Rice was constantly in trouble with the law.  In 1928 he was put on five years’ probation.  In 1936 Rice was charged with fraud again for promoting mining stock.  He was jailed and released in 1939.  Rice was not heard of again until his death in 1943.  It was discovered that this promotion wizard had been operating a saloon in Milwaukee.