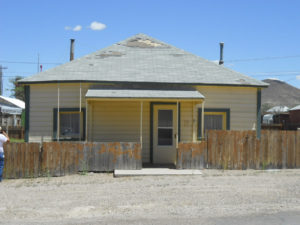 This house is an original adobe built in 1905.  The exterior walls are covered with clapboard siding to protect the adobe bricks.  The original owner/builder is unknown.  However, the house was given to the Orlo Parker family by the Red Cross after they lost their home and business in the devastating 1923 Fire.  Later, the house was sold to the Labarthe family who lived it the house for many years before leaving it uninhabited and at the mercy of the elements.

In May 2018 the north wall collapsed.   Local folks rushed to the 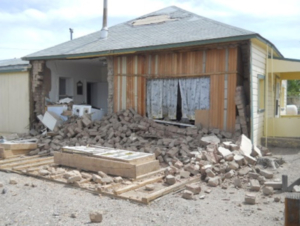 rescue shoring up the wall and saving the roof.  The remainder of the summer was spent cleaning up the exterior debris and moving furniture and appliances into the detached garage.  The property was purchased in December of 2018 by Richard Johnson and wife, Astrid. 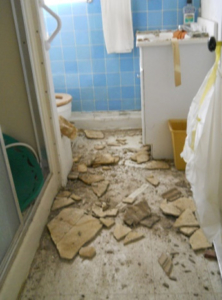 2019 was hectic.  Richard and Astrid turned the garage into living quarters and workshop.  New water lines were installed which meant trenching… by hand.  The power was updated.  The couple began the necessary demolition inside to discover the bare bones of the house.  The bathroom was an afterthought added for modern convenience like so many old houses and the ceiling was falling in.  They have big plans for 2020… which include manufacturing their own adobe bricks for the project.