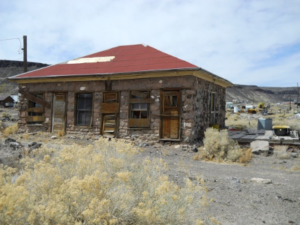 In the beginning: photo taken in June 2017

Like all mining towns, Goldfield had a booming Red Light district.

With so many single men looking to make their fortunes, it was inevitable that the ladies of the night would flock to the area to mine their share of the gold found in the district.

First came the men who worked in the mines.
Then came the ladies who lived on the line.

This stone brothel is one of only two original buildings that remain standing in Goldfield’s Red Light District.  It is rubble wall construction built in 1907 of native stone set with mud mixed with lime.  The walls inside were heavily plastered.  The building is listed in the Goldfield Walking Tour Booklet as as Stone Row House.

Ladies of the Line

The life of a “Soiled Dove” was a hard one emotionally, physically and psychologically.  They came from all walks of life into this existence on the dark side of acceptability in many ways.

Some came willingly for the excitement, the money and what they thought was freedom.  Some were tricked and manipulated by men they were sure loved them.  And there were those who were abused and treated little better than slaves.

According to local records, suicide was the cause in one third of all prostitute deaths in Goldfield.

Regardless of social mores at the time, there is no question prostitution was alive and thriving in Goldfield during its heyday.

At one time, during the gold camp’s peak production, there were literally hundreds of women working in this crowded red light district.  Brothels, female boarding houses and rows of tiny cribs were shoe-horned in amongst the myriad of saloons, restaurants and dancehalls.

The four-block red light district was a warren of thrown together buildings.  The whole area pulsed with activity.  Liquor flowed, dice rolled, fortunes were won and lost on the turn of a card and the ladies of the night reigned supreme.  Sin was big business.

The building originally had six rooms… three on each side divided by a narrow hallway that stretched the entire length of the building. The hallway has a door on each end.   At one time, according to an old insurance map, the building boasted a saloon attached to the south side of the building with access to the hallway and the ladies.  Each of the small rooms has a window and two doors.  One door opens into the room from the outside and on the opposite wall another door opens into the narrow hallway.

Two doors in each room were efficient for business back in the day:  gentlemen in, gentlemen out.  But the doors also provided an optional means of escape for the ladies in the event of a violent or abusive client.

Richard and Edie Koepnick of Goldfield bought the building in June of 2017.  The original name of this old brothel is lost in the past and probably changed many times during its heyday.  The Koepnicks’ plan to turn it into a parlor house (without the ladies, of course)  and have christened it StonehouseParlor.

The summers of 1917 and 2018 saw sorting and clearing of both the building and grounds.  The grounds were littered with old cars parts, piles of old lumber and trash as well as sagebrush overgrowth the size of small trees.  The inside of the building was piled with trash and personal items that belonged to a previous owner.   And, sadly, the building had been looted and vandalized several times in the past. 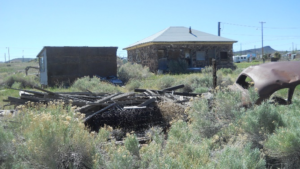 2019 was a good year… lots of progress inside including, flooring, lighting and other needed revisions.   The long hallway was replaced and wainscotting installed and ready for stain or paint.  The walls in the parlor room are readied for fancy wallpaper. 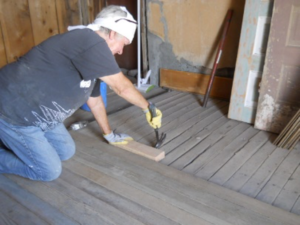 The biggest challenge came in 2020 when the east wall showed definite signs of catastrophic collapse.  Fortunately, in the nick of time, a gentleman was located with the expertise to take on the job.  The entire rock wall was taken down and then rebuilt atop a solid foundation.  It was a monumental project.

There was a LOT of anxiety and fingernail chewing going on during this phase!

Joe Taylor (last picture, far left) and his awesome crew from Beatty, NV who made this all happen.  Check out that rock work.  They are heroes!

They also repointed the north wall which was showing deterioration as well.  There is more work ahead on this project in 2021.  Check in often… 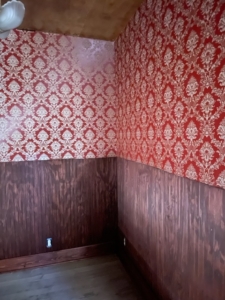 The biggest and BEST step forward in 2021 was…Wallpaper!   The “Parlor” now sports spectacular red and gold wallpaper and the wainscoting has been stained. Of course, the wainscoting still needs some poly to make it shine, but cold weather put a stop to that until spring. 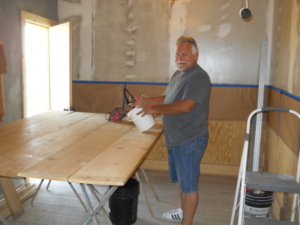 Kenny Throne, our wallpaper guy, is a true artist with the paper.  The results, as you can see are just phenomenal.  When folks walk into these rooms, well…. they are just going to be knocked out!

Esmeralda’s room now has a lovely, Spanish look with the addition of a bright yellow and white geometric design paper that just lights up the room.   All of the bedrooms will be named for the ladies and their names will be emblazoned on their door in the future. 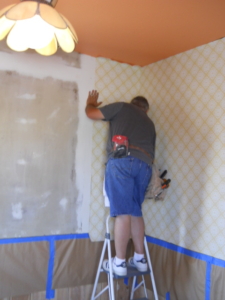 Aside from wallpaper, the summer was spent replacing damaged flooring; building partitions for the two bedrooms, exit hallway and the “necessary” (i.e., bathroom) in the East half of the building.  And the way was prepared for sheet rock on ceilings as well as preparing some window frames for glass.  The storage shed was moved to another location which helped to open up the grounds.