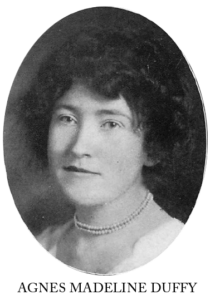 Agnes Madeline Duffy. Goldfield, ‘Tables Turned’, A Story, by Agnes Duffy, Class of ’14, appeared in the 1911 edition of the Joshua Palm, the yearbook of Goldfield High School. And she was exchange editor for the 1912 edition.

In March 1914, the Goldfield Lyric Theater “was taxed to its capacity upon the presentation by the members of the senior class of the high school of the hilarious three-act farce comedy, “The Freshman,” in which they scored a distinctive hit.”[1]  The roll of Miss Porter was played by Agnes Duffy.

And, in 1914, her senior year, Agnes was editor-in-chief of the Joshua Palm, issued in July “filled with fine illustrations and literary gems by students.” [2]

On May 22, 1916, Agnes received her Second-Grade Elementary Certificate issued to students of the first-year course of the Nevada State Normal, an affiliate of the University of Nevada. In the Nevada Educational Directory of January 1917, she is listed as a teacher in Overton, south of Moapa Valley in Clark County, Nevada, with a monthly salary of $75.00. In September 1917 through June 1920, she is teaching in Goldfield with a much higher salary of $105.00, increasing to $120.00 in 1918.

Agnes’ father, Martin Charles Duffy, born November 11, 1857 in Ireland, came to the United States in 1880 or 1881, first settling in Illinois. He and Mary Ellen Harrity (Harity, Harraughty, Garrety), born in December 1866 in Ireland, were married about 1893. Their first child, James Joseph, was born March 23, 1894 in Astoria, Oregon. Agnes Madeline, their second child, was born in Colorado on September 20, 1895. Their third child, Anthony Phillip, was born August 29, 1897 in Pueblo, Colorado and their fourth child, Martin Charles, was born in Wardner, Idaho on October 8, 1899.

Agnes’ father, Martin, was naturalized in September 1900, while the family was living in Shoshone County, Idaho. By 1905, the family had relocated to Columbia, Nevada, a suburb of Goldfield located one mile north of Goldfield where Agnes and her brothers attended Columbia’s public school and later attended Goldfield High School.

Mary Ellen and Martin’s fifth child, Bina Marie, was born in 1905 in Columbia. She died September 5, 1905 when she was six months old and she was laid to rest in the Goldfield Cemetery. The following year, in 1906, Agnes’ mother, Mary Ellen, died on July 19 and was laid to rest beside her daughter, Bina.

Summer 1919, Agnes and her friend, Miss Elizabeth Bailey, traveled to California where Agnes attended a reunion of former University of Nevada girls held in Oakland. In December of that same year, Agnes was a guest at an elaborate affair held in the Goldfield Hotel in honor of Mr. and Mrs. Earl A. VanMeter, Goldfield’s latest newlyweds.

By the 1920 Census, it appears that Agnes’ father, Martin, has left Goldfield for Portland, Oregon, working as a miner in a quartz mine. James is in Tonopah, Nevada working as a millman at a stamp mill; Agnes is age 24, single, teaching in Goldfield, Nevada, Anthony is a miner in Bisbee, Arizona; and brother Martin is still in Goldfield working as a chainman for a surveyor. At the end of the Goldfield 1919-1920 school year, Agnes accepted a teaching position in Arizona.

Reno, May 1923, while a student at the University of Nevada, at a recital given by the students of the Department of Public Expression, Agnes took part in the farce entitled “The Mouse Trap.”

Their daughter and only child, Irene Carlyle, was born in San Francisco on March 27, 1926.

In 1930, on January 16, Agnes’ father, Martin, died suddenly from heart trouble in Tonopah, Nevada at the age of 72. He was laid to rest in the Goldfield Cemetery beside his wife and daughter.

Agnes continued to live at their home at 2346 27th Avenue, San Francisco, working as a proof reader in the publishing industry. She passed away on April 23, 1960 at the age of 64 and was laid to rest beside her husband.