Ben Rosenthal was born in Bodie, California August 1, 1871.  Ben’s father was born in Russia in 1851 and he immigrated to California.  He settled in Hornitos were he owned a business.  He went on to Bodie and then to Hawthorne, Nevada in 1882.

Ben was raised in mining towns.  He played baseball for the ball team in Hawthorne.  He helped his father run the Lake View Hotel while growing up.  When his father died in 1901, Ben took over the hotel.

Hearing of Goldfield’s business opportunities, Ben and his wife Vesta moved to Goldfield in

1904.  They moved there in August where Ben became a pharmacist and jeweler.  In 1907, Governor Sparks appointed him Esmeralda County Commissioner.  Ben accepted the job and became a leader in democratic politics.  It was said Rosenthal had an easy smile and for a while he was the toast of the town, but events would soon change the politics of Goldfield.

Goldfield originally had five banks.  All but one had collapsed by 1908.  After the unions had been crushed in 1907, Goldfield’s boomtown spirit was fading.

The town was suffering from two bank failures and union troubles.  Goldfield originally had five banks.  All but one had collapsed by 1908.  After the unions had been crushed in 1907, Goldfield’s boomtown spirit was fading.  Even its population began to decline.  Property values and tax revenues also declined.  People were leaving Goldfield and moving on. 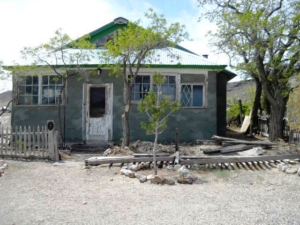 2018 photo of the home Ben and Vesta Rosenthal owned and lived in during their time in Goldfield.  Steve and Jeri Foutz of Goldfield are the new owners of the property and plan to restore the house.

Ben went on to be the Esmeralda County court clerk and served Goldfield for many years.  Ben continued as proprietor of his drug and jewelry store.  He owned a home and a boarding house.  Like a lot of Goldfield people, Benjamin eventually moved to San Francisco.  He died July 27, 1916 and is buried in the Knights of Pythias Cemetery, Reno, Nevada.