A Person of Goldfield – By John Rudderow and Deana Glatz

Jacob ‘Jake’ Goodfriend.-Born into a Jewish family at St. Louis, Missouri on February 25, 1869, Jacob Gutfreund was the seventh of eight children, five boys and three girls. His parents, Simon Gutfreund (1832-1887) and Theresia Heller Gutfreund (1831-1881), both born in Austria, came to America sometime between 1861 and 1864. They settled in St. Louis, Missouri where Simon made a living in the grocery/bakery business and was a practicing Mohel. Jake was educated in the public schools of St. Louis and, at an early age, he worked for the Wm. Barr Dry Goods Co., of that city.

In 1885, the Nebraska State Census finds Jake, age 16, living in Sidney with his sister, Bertha Cohn and her husband. Jake stayed in Sidney for several years where he was employed in the clothing business for Cohn & Co. In 1888, he left Sidney and relocated to Denver, Colorado where he remained for several years. During this time, Jake changed the spelling of his last name from Gutfreund to Goodfriend. Around 1897, Jake spent time in Anaconda, Montana where his older brother, Siegfried, was a merchant of men’s and boy’s clothing and wearing apparel.

In 1904, Jake relocated to Goldfield, Nevada. In March of 1905, he was directing the night shift at the bar of the Elite House on Main Street and by September that year, he was part owner of Jake’s Dance Hall on Lower Main Street, Goldfield

By 1900, Jake is in San Francisco, California where, in the 1900 City Directory he is a clerk for Metropolitan Tailoring Co. and living at 2707 ½ Mission. Later in the year, the 1900 Alaska Territory Census shows Jake and his two brothers, Louis and David in Nome City, Alaska. Returning to San Francisco, Jake and Fred S. Price purchased a dog racing kennel in 1901, the Gold Dust Kennels. Jake sold out to his partner later that same year and headed back to Alaska. By late 1902, he had returned to San Francisco. 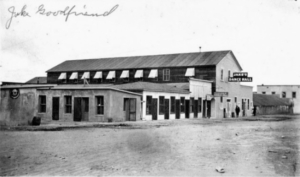 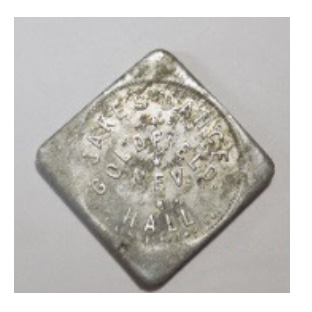 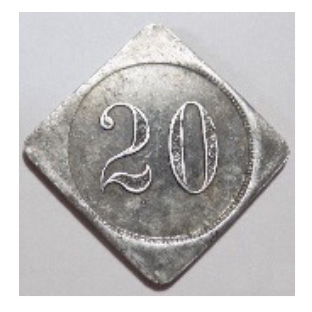 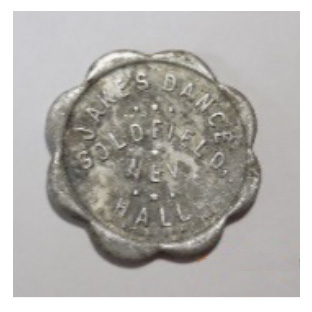 By 1909, Jake had purchased two lots and secured a lease on one of the largest buildings in the new camp of Pioneer, south of Goldfield, and opened a dance hall and saloon.

Christmas 1909, at the Butler Theatre in Tonopah where he was manager, he treated the children there to a free afternoon matinee of moving pictures and a number of specialties.

The census of 1910 has Jake living in Tonopah with his wife, Maggie, working as a manager in the moving picture industry and in March, he again opened the Butler Theater free to all the children there.

In Goldfield in April of 1910, Jake opened a new playhouse with George Griffith in charge, increasing his holdings to two moving picture and vaudeville houses in Goldfield and one in Tonopah. He was becoming known as the southern Nevada theatrical magnate, “famed as conducting the wildest, weirdest, wooliest dance hall in the history of any mining camp.” He was also a Knight of Pythias and an Elk. 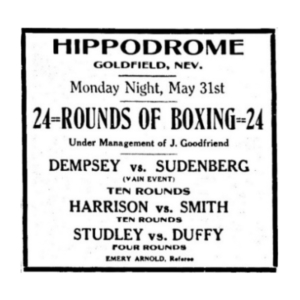 In 1915, in Goldfield, Jake matched Jack Dempsey to fight Johnnie Sudenberg at the Hippodrome on May 31st. The ‘Manassa Mauler’ himself gave Jake credit as having given him his first $100 purse and matched him one of the hardest battles of his career, against John Sudenberg.

In October 1915, Jake, who had owned the Exchange Theater in Goldfield for the previous five years, sold his entire interest to Dan Tennant.

The 1920 Census shows Jake, age 50, in Stephens County Texas with his wife, Elva, her mother and brother, working as a manager in the picture show industry and, in 1922, he is running an ad – “Picture show for sale with or without equipment. Only one in Caddo, Texas.”

Jake Goodfriend died in Los Angeles on June 26, 1934. A resident of Las Vegas until a few months prior, he had been taken to Los Angeles to undergo treatment after a long illness. He was laid to rest in the Evergreen cemetery, Los Angeles.

A few years after his death, on August 5, 1937, the Las Vegas Review-Journal printed this: “Perhaps you folks here in Las Vegas recall a small Jewish fellow who occupied a residence on the corner of Fourth and Carson streets not so many years ago. A retiring sort of a fellow but with the sparkle of memory in his bright eyes. The man’s name was Jake Goodfriend and he was in on the boom of Las Vegas back in 1929. It was Jake Goodfriend who followed the booms and it was Jake Goodfriend who promoted the match between Sullivan and Fields. Jake Goodfriend was quite a plunger in the roaring days of Goldfield, and there isn’t a person who ever visited or lived in Goldfield who didn’t know Jake. Poor Jake joined the passing parade down in California several years ago, but to thousands who lived thru the boom days of Goldfield he always will be what the name implies – Goodfriend.”