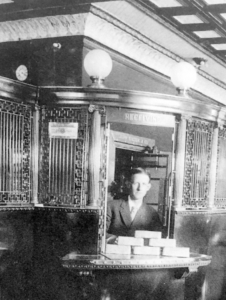 John S Cook – Gold Bars on the Counter at the Cookbank.

John S. Cook first worked for George Nixon at his bank in Tonopah, Nevada. He was hired as its cashier. George Wingfield along with George Nixon were investing in mines located in Goldfield. To gain power among mine owners they needed a bank.The John S. Cook Bank opened its doors in January 1905. It was located in a wooden shack next to the Palace Saloon. Later in the year it was moved to the Nixon Block Building and within a year the bank was conducting a growing business. It had deposits between five and six million dollars.

Cook was described as a man of quiet disposition and of few words. Everything he said was right to the point; he was a courteous and attentive listener. The bank was run with thorough business methods. In 1907 the country was suffering financial setbacks. Goldfield was affected when depositors created a run on all its banks. October 1907 would be the Cook Bank’s worse month. The bank panic sent hordes of Goldfielders to withdraw their money.

The John S. Cook Bank was the only Goldfield bank to survive the National panic of 1907.

The Cook banking system grew to become a powerful financial institution in Nevada until the 1932 Depression. Many considered saloon safes safer than banks and Cook customers took their money to Rickards Northern Saloon. Rickards in turn took gold, silver and U.S. currency over to the bank where it was displayed for all customers to see. This halted the run on the Cook Bank as others closed for good.

In 1909 Wingfield wanted to control everything so he bought out other investors in the Cook Bank including John Cook himself. With business falling off in Goldfield, Cook moved to Reno and worked in the Cook Bank there. In 1929 America suffered from the Great Depression. In 1932 Wingfield’s banking empire failed. The Cook banks closed for good and John S. Cook moved to Los Angeles, California where he died July 22, 1945.