The Goldfield Historical Society is committed to the restoration of the High School.  It is located on the corner of Euclid and Ramsey and is one of the most historic buildings in our town.   The ongoing struggle to restore this building to its former glory is chronicled in Projects

Plans for a two-story school building, with twelve rooms, located on the corner of Euclid and Ramsey streets, were first announced in the Goldfield Daily Tribune on December 8, 1906.

The cornerstone was laid August 4, 1907 at 3 P.M., and done with the full ritual of the Masonic Order. A silver trowel made from Comstock silver was used for laying cornerstones of all the most important buildings in Nevada for about 30 years prior. Mortar was spread on top of the stone, first pouring corn as the symbol of the heavenly bounty, second, wine as the symbol of joy and gladness, third, pouring oil, symbolic of divine peace and finished with a prayer. 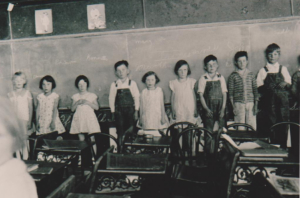 At a cost of $100,000, the newly completed Goldfield High School opened with an unofficial dedication on November 18, 1907.  The informal dedication consisted of raising the flag over the building for the first time and releasing of two snow-white doves from the furls of the emblem, as it took its place on the staff.  The students gathered on the avenue and raised their voices in the inspiring air of “America”.

The official dedication January 31, 1908 opened with the invocation given by the Rev. Holterman and closed with an address  given by the Rev. Father Dermody. In between was much oratory, from such notables as Senator H. V. Morehouse and former Principal Mrs. Mary McLaughlin Hatton, and a vocal solo by Miss Sara Strain.

The 3-story structure was designed by J.B. Randall. It has a floor area of over 19,656 square feet. The interior has 12 classrooms, an auditorium, 2 offices, 2 bathrooms, 4 storage rooms, an extra-large attic and a seating capacity of 450. The first year’s enrollment was 125 students and about 25 faculty members. 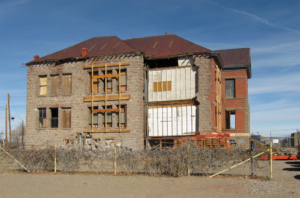 Goldfield had built four schools between the years 1906-1908. As Goldfield’s population dwindled so did the need for all of the schools. By 1918 three of the schools had closed and all of the grades held classes in the High School. By 1947 the 9th –12th graders were bussed to Tonopah High School and only the lower classes were left using the ground floor classrooms. In 1953 the elementary school across the street was completed and the high school building was abandoned due to its weakening foundation.  Listed as #8 in the Goldfield Walking Tour Booklet.