Doris Dawson (Levy) was born in Goldfield, NV on April 16, 1905, the child of Bonewitz Xerxes Dawson (now there’s a name you don’t hear every day) and Reba Greenwood.  The town would have been a hotbed of activity during those early years.  Although her father’s occupation is unknown, it probably had something to do with gold and life in the fast lane.   Sadly, her mother, Reba, died of tuberculosis three months after Doris was born.

Doris was a petite redhead (or some said dark haired) with a kewpie-doll smile. She was a charming starlet, one of many working away in low budget silent and early sound movies from 1927-1934.  And she also did photo modeling for the fashion industry.  Unfortunately, her acting career did not survive the advent of sound.  Apparently, her voice was the problem…some called it “grating”. … Ouch!   But Doris marched on with her life married a couple of times and raised winning show dogs.  She passed on April 20, 1986 in Florida at the age of 81.

Our thanks to John Dawson of Boulder, CO for this information.  By the way, he is a cousin. Doris was family. 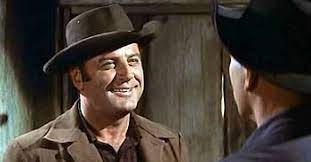 Any fan of western movies undoubtedly remembers the original version of The Magnificent Seven.   All those dashing gunslingers.    Remember the character, Harry Luck?  He was the most mercenary one in the group – more interested in gold than saving a village from a mad Mexican outlaw.  If you recall, he left the group before the big fight only to return…and die in the final battle.  That was Brad Dexter.

Now, for the rest of the Story…   Brad Dexter was born Boris Michel Soso on April 9, 1917 in Goldfield, Nevada.  His family immigrated from Serbia to the United States and ended up in Nevada.  His most famous (and only quote) “I’m the one from The Magnificent Seven nobody remembers.”

He racked up a lot of credits in movies and TV playing villains.  However, apparently, he was easygoing and friendly in real life.